VICTORY IN YOUR BACKYARD

Growing together provides health, wellness and gives back to charity too!

100% of your donation benefits FarmOn!

Foundation and is tax deductible to the fullest extent allowed by law.

During World War I and later World War II, Americans were encouraged by the government to plant small herb and vegetable plots wherever they could, so as to avoid the threat of food shortages on the home front.  At private residences and public parks across the country, Americans took to the soil, spade in hand.  At the height of World War II, around one third of all the vegetables produced in the United States came from one of our 18 million victory gardens.  Victory gardens were such a ubiquitous symbol of American strength and resolve that Eleanor Roosevelt even had one planted at the White House.

In the past 25 years, freed from their wartime context, victory gardens have been making a comeback.  In 2009 Michelle Obama planted her own at the White House, the first since Eleanor’s, as part of her Let’s Move campaign to combat childhood obesity.  More and more Americans are getting serious about growing their own food.  It’s part of a greater trend toward conscientious food consumption led by pioneering figures like Alice Waters.

We have our own victory garden right here at Empire Farm.  It was where we held our grand opening ceremony back in 2014, with a little help from Ms. Waters herself.  Today, it’s where we grow much of the produce for our community-supported agriculture (CSA) program, as well as part of the crop for our pilot initiative for hemp cultivation.

We love our victory garden.  We think everyone should have one. Choose from our variety of victory garden kits and get started growing today.

"Building reliance in the face of uncertainty is crucial - resilience in local and regenerative farms, in our own front yards and in the food that we eat. Let this be our greatest moment."

“Right now this seems so vital. It was put out by the government 100 years ago around the time of the pandemic in 1917. We responded by planting Victory Gardens. We can do it again like we did back then.” 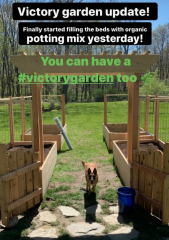 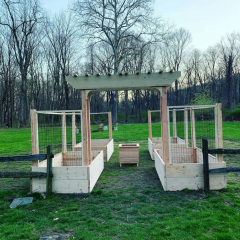 We are actively preparing our How Does Your Garden Grow educational stories to share with you! Learn to sow a seed and feed, how to transplant, why we use amendments, how to bee keep, cooking ideas, food preservation and much more!

Do you need more info?